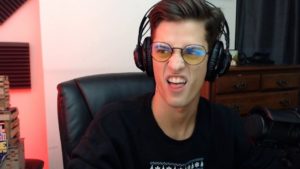 Natehill started streaming his Fortnite gamplays in November 2017 with the goal of becaming a pro-player. His brig break came for him when he won the 2018 Red Bull Rise Till Dawn Tournament hosted in Chicago. After that, he his reputation in the Fortnite community grew quickly and he went on to join FaZe Clan in August 2018.

He hascontinued to compete in tournaments and also focussed on building up his stream so that he could become a fulltime streamer.